The emergence of new humanitarian needs and the persistence of the needs not covered led to a worsening of the vulnerability of the people affected in 2019. This situation is further aggravated by factors related to the deterioration of the security situation in the three regions of Diffa, Tahoua and Tillabéri, where non-state armed groups have increased their activities during the last months. In Diffa, recent attacks by armed groups have resulted in secondary movements of about thousands of people. In Tahoua and Tillaberi, around 80,000 people have been internally displaced since the beginning of the year. Recently, the deterioration of the security at the Nigeria border has also led to the displacement of more than 35,000 Nigerians towards the region of Maradi. Humanitarian resources continue to decline as needs grow. To date, 9 months after the beginning of the year, the humanitarian response plan for Niger is funded at only 36% of the required budget (in comparison, at the same period in 2018, the plan was financed at 41%).

Massive displacement in Maradi: a new emergency on Niger's borders

Since May 2019, more than 40,000 Nigerians from the states of Sokoto, Zamfara and Katsina have decided to leave their homes despite the insecurity and constraints of the rainy season, for seeking refuge in the region of Maradi, south-east Niger. These people say they fled the upsurge of violence, kidnappings and killings perpetrated against their communities by armed groups whose exact motives and structures remain unclear.

Movements started with a first wave of 15,000 refugees arrived in Niger in mid-May 2019, followed in July by a second large flux. Smaller community movements are now continuously recorded along the border. According to a trend analysis proposed by the Nigerian authorities and UNHCR, a total of 50,000 refugees could seek refuge in the region of Maradi by the end of 2019 as a consequence of the continued attacks against civilians in Nigeria. Refugees are currently being hosted by Nigerien families living along the border, in the districts of Guidan-Roumdji, Guidan Sori, Gabi, Safo, Madarounfa and Tibiri. Their arrival has significantly increased the demographic density of these districts, which originally counted for about 45,000 people. Hospitality has been offered by the hosting communities despite the precariousness of their conditions and their limited reception capacities, and thus increasing their level of vulnerability in several sectors, such as food security, water, hygiene and sanitation (WASH) and health.

A series of multisectoral assessments (MSAs) conducted by the Rapid Response Mechanism (RRM) in 40 villages has found that 64% of host families give shelter to an average of 23 refugees per household. It should be noted that only 37% of these families live in functional shelters, and that the recent floods have affected the living conditions and resources of more than 25,000 people in this region. Such a situation is raising concerns on the rapid depletion of drinking water and food supplies, on the rapid spread of epidemic diseases such as measles, polio and choler, for which cases are periodically reported in the region, and which have as a consequence the deterioration of the nutritional status and an increase of child mortality. UNHCR has already noted a high prevalence of acute malnutrition among children under 5 and pregnant women: this rate is around 35% among refugee children and 16% in host communities. At the same time, the results of a rapid assessment of the food and nutrition situation conducted during the past August by the Dispositif National de Prévention et de Gestion des Catastrophes et des Crises Alimentaires (DNPGCA) in collaboration with humanitarian partners, show that the impact of displaced populations on resources has dramatically accelerated the depletion of food reserves of hosting households during the lean season, and in a moment when the punctuality of markets supply has been seriously challenged by the growing insecurity.

Despite the patrols of the Defense and Security Forces (FDS) of Niger and Nigeria, no protection monitoring mechanisms have been set up to assist the psychosocial distress in which the refugee and host populations live as a result of the violence, abuses and exploitations. And yet, several protection risks are linked to the settlement of the refugees near the border. Recently, between September 17 and 19, a group of about 100 armed individuals traveling on motorcycles reportedly carried out several attacks against civilians on both sides of the border.

A new crisis for the national humanitarian agenda

Due to the difficult access to the areas fled by these communities and to the lack of a well-structured cross-border coordination, neither the 2019's Humanitarian Response Plan (HRP) for Niger nor the Regional Response Plan for Refugees (UNHCR's 2019 RRRP) had forecasted such an influx into the region of Maradi.

An extraordinary session of the Humanitarian Country Team (HCT) held in Niamey on August 23rd, called for the immediate activation of the RRM in the region, the establishment of an appropriate coordination mechanism, and the mobilization of the CERF Rapid Response window to immediately respond the most urgent needs and to relieve the pressure on the hosting communities by initiating a system of communicating vessels with new reception areas. A working committee was set up by the Nigerian authorities to define the modalities for ensuring the voluntary relocation of more than 41,000 refugees in the Maradi region to newly identified hosting communities. Meanwhile the pre-existence of different organizations and technical services in the region has allowed the activation of basic assistance activities, such as the distribution of 300 shelter kits and non-food items by different organizations and a distribution of 900 tons food mobilized by the government.

At the same time, UNCHR issued in August a dedicated emergency response plan which estimates that 16.8 million USD will be needed to assist 65,000 people (50,000 refugees from Nigeria and 15,000 members of the host population) in the sectors of water, hygiene, sanitation, protection, food, health for the next six months.

According to information released on September 20 by the Ministry of Humanitarian Action and by the national Civil Protection, 211,366 people have been affected by the floods in Niger since August 2019. The toll is of 57 deaths and 16,375 houses damaged by the waters. Three regions account for 67% of the affected people : Zinder (80,534 people), Maradi (28,847 people) and Agadez (31,222 people).

More than two-thirds of the victims (about 150,000 people) were recorded only over the last two weeks, between September 2 and September 20, mainly because of the heavy rains recorded in the Niger Basin and the overloading of dams containing waters in Burkina Faso and Mali.

Already on August 30th, the government alerted the population and the humanitarian organizations based in the country that the river Niger had passed the flood stage of 620cm and reached the 640cm. The last time the flood stage had been reached by the river, in 2012, the floods had left dozens of dead and affected the living conditions of nearly 500,000 people.

Nevertheless, the damage assessment for this year already exceeds all the forecasts made by the most relevant national plans, including the ones presented in the 2019’s Humanitarian Needs Overview, which estimated that 170 000 people would have been exposed to the risks of floods, and the ones presented by the National Forecast Agency, which considered 200,000 people at risk of being affected.

The government and its partners are currently working to assist the affected people in the priority sectors of shelter and non-food items, food security and WASH. Distributions of Shelter and NFI kits have been activated by several partners in the different regions within the limited availability of pre-existing stocks. At the same time, the national Food Crisis Cell has set up food distributions for the affected communities of Niamey who have found shelter in schools and public facilities. However, the response provided up to now is not commensurate with the urgent needs identified in the different sectors and significant gaps remain to be filled.

A Floods Crisis cell was activated to jointly develop a response plan with the State and its partners.

According to the experts of the Ministry of Agriculture and Livestock, the agricultural and pastoral campaign 2019 in Niger seems to progress under the best auspices. The large coverage of rainfalls not only facilitated the growing of crop in most of the monitored areas, but also increased the grass cover available for livestock. Forecasts on harvest prospects indicate that if rainfalls will continue between the 15th and the 30rd of September, the positive production balance could oscillate between the 33% and the 66%.

Already in 2017 and 2018 Niger had registered cereal surpluses which have relatively improved the food situation of households. The availability of cereals on the market facilitated in fact a significant decrease of market prices for millet, sorghum, cowpea, compared to the past decade, and a relative stabilization of the prices for maize and rice. By only comparing the situation with the one reported in 2018 at this same period, it is possible to register significant decreases in the prices of most consumed cereals: -25% for millet, -20% for sorghum, -36% for cowpeas and -13% for maize.

However, despite the positive performances of the agropastoral production, food insecurity remains a risk for the poorest households who have exhausted their resources during the"lean season", a period from May to August when villages experiences from little to absolutely zero harvest. Although this year’s lean season do not seem to have had significantly impacted cereal prices on the market, many households live in a very poor context and lack the necessary financial means to buy their food.  Added to this are the many households living in the regions of Diffa and Tillabéri, whose regular access to food resources is challenged by a permanent security crisis disrupting cross-border supply flows, limiting transactions and challenging movements of people and commercial goods. A significant food defici and the deterioration of livelihoods conditions for both displaced and host communities are the direct consequences of these factors.

The results published in March 2019 by the Harmonized Framework for the analysis and identification of areas and populations at risk of food and nutritional insecurity estimated that 1.2 million people are threatened by food insecurity, with the highest peak reached during the lean season, and with the most affected areas located in the regions of Diffa, Tillabéri and Tahoua, and particularly in the departments along the borders with Nigeria, Mali, and Burkina Faso. According to the estimations of the 2019’s Humanitarian Response Plan, about 190,000 people are expected to need food assistance only along the the Mali / Burkina Faso border area, and 289,000 people in the region of Diffa.

The government's response plan targeted 1,170,589 people (170,267 household) suffering of food security from phase 3 to 5 with free distribution of cash and food during the three months of the lean season (June-July 2019). These are households that cannot afford the food they need and whose level of food security oscillates between “crisis” and “famine”.

The pastoral situation is not immune to persistence of the food security crisis. The expansion of the herbaceous coverage throughout the country hides pockets of drought in several areas of Diffa, Tahoua, Zinder and Maradi regions. To support pastoralists, FAO has already delivered 3,400 tons of livestock feed between February and March 2019 while 5,000 tons have been distributed by the CCA. Additional 10,000 tons of livestock feed are now being distributed by the GIZ, while global needs are estimated at 15 000 tons for the entire country. 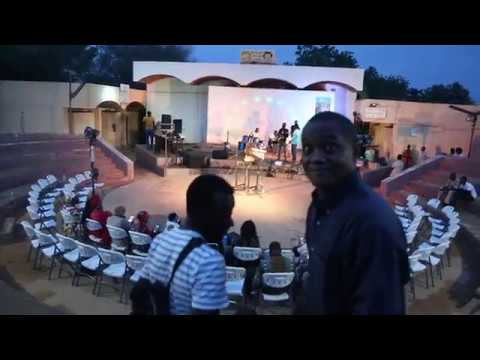 A university arena, 10 local artists, 4 women sharing their experiences as aid workers and social entrepreneurs, 28 organizations presenting their projects at the Humanitarian Careers Forum, 26 stories of humanitarian women celebrated in a photo exhibition, the gastronomy of 12 refugees from 5 different countries, and dozens of other activities taking place all over the country.

Some images from the 2019's World Humanitarian Day in Niger.